This area of the website is dedicated to Transformers news. Currently this website contains 717 news stories divided over 48 pages. You can submit a news story by using our news submission page.

Just another day on the set of Transformers 4

Michael Bay has updated his Flickr account with a new image titled "Just another day on the set of Transformers 4". You can view the image by clicking on the thumbnail below.

Thanks to ComcBookMovie a new on set image has appeared showing yet another super car, this time a bright yellow Saleen S7.

Will the car appear in the movie or is it owned by somoene working on the film?  If the car appears in the movie, will it just be in the background or turn out to be another Transformer?  Speculation is running around that this may well be either Sunstreaker or Drag Strip, for obvious reasons

Mark Wahlberg on the Human Element in Transformers 4

Red Carpet News TV have posted a video interview they held with Mark Wahlberg onto YouTube where he talks a little about the human element in Transformers 4. You can watch the video below.

As with the previous three live action Transformers Movies, the position of the CGI Transformers, on set, is represented by someone holding a cardboard face on a stick.  The faces generally represent the character who will be added in in Post Production.  In this case the figure appears to be an older, bearded Transformers, smoking a pipe.   This will most likely turn out to be Hound (Autobot Hound).

The on-set images from Transformers 4 which have been posted by JustJared.com which feature Mark Wahlberg and Nicola Peltz reveal a new weapon which is being held by Mark. When you look closer, the weapon appears to contain Cybertronian symbols much like the Allspark cube.  You can view the images here.

The Transformers Live Action Blog have more images which appear to reveal the weapon as the Star Saber, as well as posting images and videos from recent days shoots including what appears to be a wreckage of one of the ships from Transformers Dark of the Moon

To start the day here is a round-up of some recent interviews which were held with Mark Wahlberg where he makes reference to the fourth Transformers movie.

Metro News Canada interviewed him regarding "2 Guns" and "Transformers 4".

Of course he was tight-lipped but said that he is playing "a single dad who’s trying to raise a very attractive teenage girl in the real world."

Also he mentioned his daily routine while filming:
"I don’t go out at night anymore, so that makes it a lot easier. I go home, I’ll eat dinner, I’ll read the script and prepare for the next day’s work, and go to bed right away. I’ll wake up with a little bit of time to say my prayers, read my prayer book, maybe do a little workout, and then get back at it. And then steal a cat nap whenever I can during the work day — but (‘Transformers’ director) Michael (Bay), once he starts working, he doesn’t like to stop."

Following on from that interview MTV also interviewed the actor and asked specifically regarding any Dinobots would be involved within the movie.

When asked whether there would be any Dinobots on Transformers 4 the actor replied "None of your business. You don't want me to get replaced halfway through production for divulging secrets".

Mr. Wahlberg mentioned that the new installment feels unlike anything that has come before it, thanks in part to the character he has taken on. "It feels like a completely different movie, very fresh," he said. "Obviously, it's a really interesting dynamic, being a young, single dad having a teenage daughter, trying to succeed as an inventor, having very little means and also trying to provide for my family. Then all hell breaks loose."

Finally ComicBook.com are reporting that after Mark Wahlberg's children visited the set in Detroit, the actor asked Michael Bay if his kids could be in the movie. After a quick and impromptu audition, Michael Bay agreed.

We missed a day yesterday, but here are the figures from Day 5 of the Who is your favorite Transformer annouced so far for Transformers 4

It's day 3 of Michael Bay's poll to find out who is everyone favourite Transformers 4 reveal thus far.  Whilsy there have been more votes the percentages haven' changed around that much and you have to feel a little sorry for the Chevy Sonic RS with only 32 votes

In a follow-up to the news story we bought you yesterday announcing the poll running over on Michael Bay's website, we thought we would bring you an update of the results thus far. 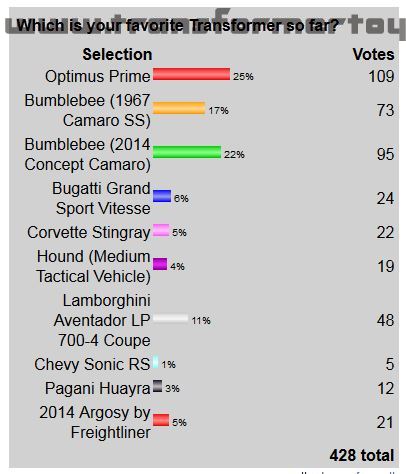 Well a day later and the poll now looks like this: 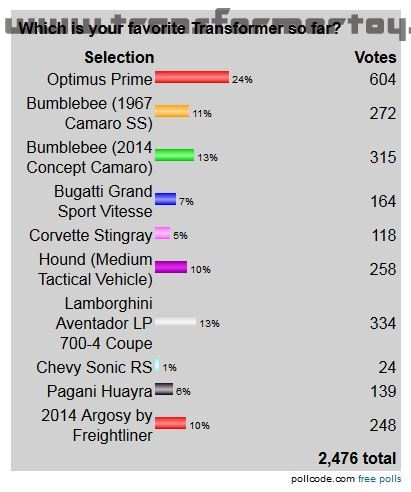 So whilst Optimus Prime continues to lead with almost 1/4 of the votes, Bumblebee has lost ground to Hound, the Lamborghini and the Argosy Freightliner.

Michael Bay has posted a poll over on his website to find out which of the vehicles revealed thus far is proving to be everyones favourite for the fourth live-action Transformers film  The poll is ongoing but right now the results show Optimus Prime and Bumblebee out in the lead as was to be expected, but with only 428 votes cast thus far these figures are expected to change:

Bumblebee to be 2014 Concept Camaro and final Transformers vehicle

He also tweeted out regarding the announcement using the tweet you can see below.

You can view the two new images below:

Michael Bay has posted an image of the 2014 Argosy cab-over truck by Freightliner onto his website / twitter and Flickr account with the caption The adventure continues to transform with a very different offering from Daimler Trucks North America . . . the imposing 2014 Argosy cab-over truck by Freightliner. The truck, which can be seen below, would make a good Nemesis Prime or Motormaster and with the sheet number of sports cars which have been spotted thus far, the chances of seeing the Stunticons feature is certainly increasing.

Titus Welliver spotted on the Transformers 4 set in Texas

A pair of photos posted on Instagram by Nicole_4_Eva from the Lockhart, Texas set of Transformers 4 have revealed that actor Titus Welliver is on set with Jack Reynor and Mark Wahlberg.  There had been no previous reports of Mr Welliver being tied to Transformers 4, so his actual role on the movie is very much unknown.

Thunderclash
Click the link or image above to view the Thunderclash toy gallery. The gallery contains 7 images of this figure for your viewing pleasure.

Ep 20: Arise Wreck-Gar
Wreck-Gar is bought to live by Sari's key and a fragment of the Allspark at the beginning of episode 20 of Transformers Animated ....