This area of the website is dedicated to Transformers news. Currently this website contains 77 news stories divided over 6 pages. You can submit a news story by using our news submission page.

Fan to Fan have some images of the G1 coloured Music Label convoy toy. These may well be the same as the photoshopped images which ages3andup reported to TFWorld2005

You can see their image by going here (remote linked below)

TFWorld 2005 are running the following news story regarding a re-coloured version of the Music Label Convoy figure in Generation One colours.

.. agesthreeandup has received a solicitation from Takara for a Music Label iPod Docking Station Convoy in Generation 1 colours. The mold will retain the modifications made to the mold for the white release, including the new head, and the trailer will be designed in grey with the traditional stripe down the side. This figure is due for release in March of 2008 and is retailed at 15000 yen

Transformers Classics to be released in Japan

TFWorld2005 member Ages3AndUp has posted a thread stating that the Transformers Classics line will be released in Japan.

It looks like Japan is offering it customers the Classics line. It will consist of 4 figures at first, Optimus, Megatron, Starscream and Bumblebee. They will be priced at Japanese prices like $35 for Voyager size and $25 for Deluxe but for those who missed these figures, that seems like a small price to pay for them to be available again.

New Transformers listings in the next Woolworths catalogue

"Hey there just saw the range Woolworths will be stocking, the usual stuff with the addition of Ultimate Bumblebee (Ł79.99) and an exclusive real gear 3 pack for Ł19.99.

They also will be stocking the Darth Vader Death star toy and some exclusive starwars figures (non transformer)."

If anyone can provide images of the listing, please get in touch with us by using the email address on our contact us page or via the Submit News page

UK online dealer, Toyz and Gamez, has reported to TFW2005 that the recoloured Transformers Movie Barricade toy known as Recon Barricade will only be available within the UK via one retail store. Toyz And Gamez does not mention the name of the store, though we expect it to be announced as The Entertainer, as Argos will not be stocking much in the way of new products for a little while, Woolworths, in many towns, have already dropped the Transformers line and Toys R Us is shelf warming happily at the moment, with limited distributions of the just released Longarm and Final Battle Jazz. Toyz and Gamez does go on to say that the next wave of toys will include Dropkick and Payload

Re-Issue Skylynx to be the New Year toy?

Seibertron.com are running a news story confirming that Skylynx will be the 2007 New Year Transformers release by Takara. They credit Snakas for the news, although no links to where Snakas mentions this are given. They do however state later in the same story that no confirmed date is set for Sky Lynx?

So will the toy get a release at the end of the year? Will e-Hobby run their regular New Year exclusive toy, and if so would it be a re-coloured Sky Lynx? For the moment only time will tell.

This figure will NOT be given away if you buy a Chevrolet Aveo. In fact, buying the car isn't even necessary to get the exclusive. Its a China only Promo for the Chevrolet Lova (Aveo in the U.S.). The idea was you go to the movie, after you go to a Chevrolet dealer with the movie ticket(s) and test drive the Lova. You get the robot for test driving the car.

You can see the report here.

The Allspark have a little discussion going on about the possibilities of a Transformers Masterpiece Thundercracker figure, all steaming from one picture on the packaging of Masterpiece Skywarp.

You can read the reasons behind the rumours here.

Thanks to AcToys for pointing out an auction on Taobao for a Transformers Movie Swerve (later rumoured to be a Transformers Universe toy). Note that Universe is the name of the line Hasbro will be releasing the Transformers Classics under in 2008.


Seibertron.com also state that this toy is to be given away free if you buy a new Chevy Aveo. 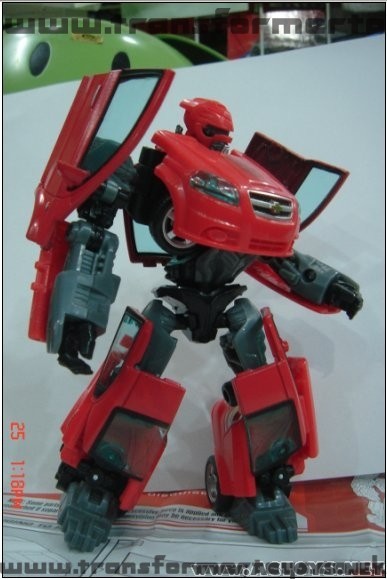 An ebay auction due to end in the next 30 minutes appears to be of a Transformers Movie Generation One Starscream Fast Action Battlers toy. Is this a recolour of the regular FAB Starscream mold, or a custom?

You can see the auction here.

Japanese Toy seller XL-Toys are reporting that Takara-Tomy may be releasing a black version of the Transformers Music Label Soundwave MP3 figure, in replace of a second wave of the white version. They say the "Blue Version" second run is still to occur and that the release date for both versions is November 2007.

Hong Kong Transformers website AcToys have a few images of a metallic voyager class Transformers Movie Megatron (Frozen Megatron toy). The image could still prove to be a custom repaint, although with the several versions of Optimus Prime planned, it makes sense that Megatron would also get recoloured versions.

As we're at the end of July it's now become time for us to publish our Site Mirror of images which first appeared on the Chinese Talk Transformers discussion board. The images include the Transformers Movie Leader Class Brawl figure (Transformation steps) as well as several images of the newly released Transformers Classics Micron Booster 4 pack.


MICHAEL McCONNOHIE appearing as "The Hooded Demon" on NBC's PASSIONS

The Draxhall Jump's website has been updated with some more concept art from the cancelled Transformers Transtech line which would have followed Beast Machines. The new images start from from image 30 and then later at image 70.

Credit to the Allspark for the news.

Unpainted Mirage
Click the link or image above to view the Unpainted Mirage toy gallery. The gallery contains 10 images of this figure for your viewing pleasure.

Ep 20: Arise Wreck-Gar
Wreck-Gar is bought to live by Sari's key and a fragment of the Allspark at the beginning of episode 20 of Transformers Animated ....