I can not disclose the specifics, but you can be sure that the joining of the Dinobots will give the audience new excitement. In addition to Optimus Prime, Bumblebee, the appearance of these classic roles changed, today the world's coolest, most exciting cars will appear in the film, including China's vehicles, whether you are a car enthusiast, you will feast your eyes and be shocked by them."

We'll have to wait and see which, if any, gets used

We have found some new Transformers related trademarks filed with the USPTO by Hasbro Inc. The trademarks are:

TakaraTomy have been tweeting out character models of Beast Convoy, Fire Convoy, Super Mode Convoy, Grand Convoy and Galaxy Convoy to promote the Fans Choice Masterpiece contest which is taking place.  It seems, however, that some fans are incorrectly mistaking these character models for designs of Masterpiece figures of the characters.  They are not. Most of the sheets clearly contain the date stamps and are also available within our Series Bible section of the website which contains various models sheets from Beast Wars and Beast Wars II as well as some Car Robot sheets.  We own character models from G1 through to TF Animated so let us know if you would like to see more of these types of galleries.

Roll Out Roll Call have announced their new guest line-up for the Transformers, G.I-Joe and Action Force show which will take place in Southampton on the 12th and 13th of October 2013.  This years show, dubbed "Meet the makers" brings together various product designers who have worked onthe lines who will share their insights into toy design and manufacturing process which is something you do not get to hear much about here in the UK.  The guest line-up includes: 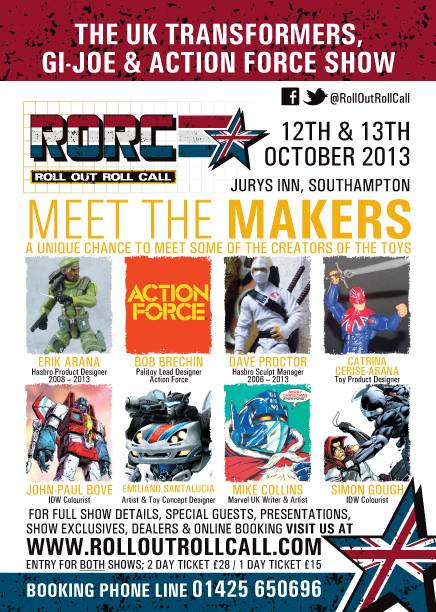 TakaraTomy have posted that they are extending the Fans Choice Masterpiece Poll until the 6th of September.

We are getting closer to Roll Out Roll Call  2013, The UK Transformers, G.I. Joe & Action Force Event and tickets will be going on sale very soon from All The Cool Stuff website just as soon as Dave Tree is back from Cardiff.

There has been reasons for the delays in putting tickets up for sale for the event one of which was to make sure that the guest line-up was set in stone, but having seen the names of the guests we are looking forward to this event even more.

For everyone wondering about tickets prices here are the details:

If you want to guarantee yourself a Masters Of The Universe Classic Strobo figure, add £35.00 to the ticket order.

The show is primarily a Transformers / G.I.Joe / Action Force event but this year a sub-show dedicated to Masters of the Universe is also taking place.

Here are the details

The Allspark have added a new Transformers Manga to their TF Pulp section, this time the comic strips from the Million Publishing Transformers Generations 2013 book titled "Metro Wars" and "Starscream's New Power"

eBay seller lena81822, has posted an auction for a repaint of the Transformers Generation ATB Megatron figure in a purple colour scheme for what appears to be a cross promotion with Nike and NFL player Calvin Johnson.  The figure comes with the Nike tick trademark on his feet as well as an American Football and what appears to be a signature on his chest.  Calvin Johnson plays for the Detroit Lions and has been given the nickname Megatron and we can confirm that it is his signature on the toy, as you just need to compare the images to this one.

You can view the images of the Megatron below:

The figure is currently listed on several eBay auction. auction

"Transformers 4 - June 2014 Dinobot theme + 2 more" is what the listing states, adding more fuel to the fire that the Dinobots will feature in the Transformers 4 Movie toyline, and potentially in the movie itself.

Game Trade Magazine have images from the upcoming Invincible Iron Man HeroClix set which have revealed that Deaths Head will be released as one of the characters.

The design is based upon the artwork of Simon Williams.

TakaraTomy have announced that they have extended the deadline for voting in their Transformers Masterpiece Fans' Choice Poll from August 31st to September 6th.  This extension gives fans an extra week to vote by submitting robot points from Transformers Go!, Generations, and GT toys to the character of their choice.  At the end of July it was announced that Star Saber was winning the poll. Click here to view the extension announcement.

Lorenzo di Bonaventura has announced that the four winners of Chinese "Reality TV" competition to win parts on Transformers 4 have been chosen after four months of of the contest.

"I want everybody to have fun," Lorenzo di Bonaventura, the film's producer who has produced all the Transformers movies, told China.org.cn about the producers' decision to recruit actors through a TV contest aired on the China Movie Channel. "We are always looking for different ways to learn about other cultures. This is a great way to see people's passion and excitement. It allows for everybody to have fun together," he added.

You can read more over on China.org.

Thundercracker
Click the link or image above to view the Thundercracker toy gallery. The gallery contains 5 images of this figure for your viewing pleasure.

SDCC 07 - Preview
A preview video from the 2007 San Diego Comic-con where the Transformers Animated toys were displayed. ....