This area of the website is dedicated to Transformers news. Currently this website contains 227 news stories divided over 16 pages. You can submit a news story by using our news submission page.

Below you will find a video preview of next weeks Transformers Prime episode, episode 47, which is titled Alpha Omega.  The episode continues on from last nights episode with the story arch running for at least another week afterwards.

AT&T's U-Verse listings has vbeen updated with an expanded description of the upcoming Transformers Prime episode, episode 48, Hard Knocks.  The episode is the third in episode within the story arch which began last night with Episode 46 - Legacy.  You cxan view the description below

When their desperate efforts to acquire the coveted Omega Keys take an unexpected and frantic turn, Knock Out is able to take advantage of the power of sound while Starscream uses his efforts to focus on the power of hyper-speed.

With UNICRON defeated by OPTIMUS PRIME, what was thought to be the end of AUTOBOTS' darkest hour is actually proving to be just the beginning. The dynamic second season of Hasbro Studios' acclaimed animated hit series TRANSFORMERS PRIME digs deeper into TRANSFORMERS mythology as both the AUTOBOTS and DECEPTICONS uncover clues relating to secret artifacts of Iacon, CYBERTRON's capital city. Their discoveries could not only change the balance of power in the war, but also potentially revive their dead home planet. Fans of all ages can relive the thrilling adventures of TRANSFORMERS PRIME when the complete SEASON TWO debuts on home entertainment shelves nationwide in the U.S on DVD November 20, 2012 and on Blu-ray November 27, 2012 from Shout! Factory, in collaboration with Hasbro Studios.

TRANSFORMERS PRIME: SEASON TWO contains all 26 captivating episodes in perfect high-definition picture and purest digital sound available. Special bonus content highlights include OPTIMUS PRIME: Up Close and Personal Panel with Larry King and Peter Cullen from San Diego Comic-Con International 2012, and brand-new interviews with the series creative team! This is an essential home entertainment collection for every TRANSFORMERS fan, collectors and entire family. The 4-disc Blu-ray collection is priced to own at $59.99 SRP. The deluxe 4-DVD set is sold separately and has a suggested retail price of $29.93 SRP. Pre-order available now at Amazon.com or ShoutFactory.com

OPTIMUS PRIME: Up Close And Personal Panel From San Diego Comic-Con International 2012 - The incomparable Larry King, one of the most recognized broadcast interviewers in the world, goes one-on-one with voice actor Peter Cullen (OPTIMUS PRIME). "The King of Interviews" salutes the beloved Cullen and takes fans on a journey through the actor's early days on the original 1984 animated TV series "TRANSFORMERS Generation One," the three box office smash TRANSFORMERS movies, and his current work on The Hub TV network's Daytime Emmy Award-winning animated series TRANSFORMERS PRIME from Hasbro Studios.
Brand-new interviews with the creative team


About Hasbro
Hasbro, Inc. (NASDAQ: HAS) is a branded play company providing children and families around the world with a wide-range of immersive entertainment offerings based on the Company's world class brand portfolio. From toys and games, to television programming, motion pictures, digital gaming and a comprehensive licensing program, Hasbro strives to delight its global customers with innovative, well-known and beloved brands such as TRANSFORMERS, LITTLEST PET SHOP, NERF, PLAYSKOOL, MY LITTLE PONY, G.I. JOE, MAGIC: THE GATHERING and MONOPOLY. The Company's Hasbro Studios develops and produces television programming for markets around the world. Programming in the U.S. is distributed on The Hub TV Network, a multi-platform joint venture between Hasbro and Discovery Communications (NASDAQ: DISCA, DISCB, DISCK). Through the Company's deep commitment to corporate social responsibility, including philanthropy, Hasbro is helping to build a safe and sustainable world for future generations and to positively impact the lives of millions of children and families every year. It has been recognized for its efforts by being named one of the "World's Most Ethical Companies" and is ranked as one of Corporate Responsibility Magazine's "100 Best Corporate Citizens." Learn more at www.hasbro.com. (c) 2012 Hasbro, Inc. All Rights Reserved.

Jim Sorenson has published a new Ark Addendum entry onto his Blog Disciples of Boltax. The entry is called The Ark Addendum - Perceptor's Transform, and as the name suggest it contains the transformation sequence for Generation One Perceptor. Check it out!

The Ark Addendum - Sureshot's Transform (and even more Farscape)

Jim Sorenson has posted a new Ark Addendum entry onto his blog entitled "Sureshot's Transform (and even more Farscape)."  As you can guess, the entry covers the Targetmasters transformation sequence but here is Jim to tell you more:

"The Ark Addendum marches on!  I'm honestly not sure what I'll bring you next week, but this week I finish off the last of many partial sequences I've been through, the transformations for the Headmaster characters.

Sureshot's our boy this time.  I'd say my favorite image is probably step 1, just showing the car zooming along at high speed.  It's nice that they didn't just reuse the basic car model.  It's a bit odd that they violate the 180 degree rule from that shot to the next one, though."

Play.com, as they've made their Fall of Cybertron preorders live for both X-Box 360 and PS3. If you preorder from Play.com now, you will get an exclusive Dinobot unlock in the form of Swoop! No word just yet if the Dinobot will be available as a preorder bonus for a store such as Best Buy. Will the remaining Dinbots be revealed as playable characters?

The official Transformers Game website has been updated with new images of Transformers Fall of Cybertron characters.

Planet Iacon have posted up a few imaegs of some of the Transformers Fall of Cybertron toys, including Optimus Prime, Jazz and Shockwave.

The Art of Transformers Fall of Cybertron book on Amazon

Amazon.com has been updated with an art book to go along with High Moon Studios Transformers Fall of Cybertron game.

You can see the Amazon sale page here.

An update to the website has seen the unlocking of six character bios. Optimus Prime, Bumblebee, Cliffjumper, Megatron, Shockwave, and Starscream get the treatment. Included are interactive models of their robot and alternate modes and brief descriptions and a mention of each one's special ability.

Head over to Transformers: Fall of Cybertron to check them out for yourself!

The Transformers Facebook page revealed the third and final Insecticon yesterday for Transformers Fall of Cybertron  This time Shrapnle is shown off, under his new name of Sharpshot

There are a couple of additional screen shots of GameStop's G1 Retro Optimus Prime courtesy of EGMNow.com,

Pre-order Bonus Offer
Pre-order Transformers: Fall of Cybertron and get access to Bruticus (G2) to use in Single Player mode. A code to access the content will be emailed to you within two days of your order shipment. This offer will be extended to all pre-orders. Offer valid when shipped and sold by Amazon.com, while supplies last. Amazon reserves the right to change or terminate this promotion at any time. Please read the PlayStation Network and Xbox Live terms of use. 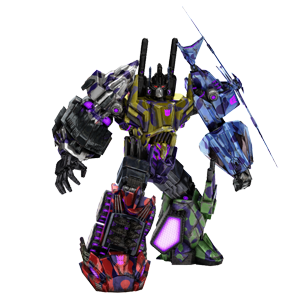 High Moon have released an image of Transformers Fall of Cybertron Kickback,  to go with Hardshell (Bombshell) shown earlier.

Jim Sorenson is back this week with another edition of The Ark Addendum.  If you pop on over to his blog, Disciples of Boltax, you will find a new article titled Madman's Paradise part 2: Mara-Al-Utha in which Jim covers the character models for the Madmans Paradise episode of Season 3 of the original cartoon, so go take a look

Power Up VT6
Click the link or image above to view the Power Up VT6 toy gallery. The gallery contains 12 images of this figure for your viewing pleasure.

Hasbro Inc submitted a trademark application for SCRAPPER with the USPTO on the Monday, 21st April 2008. The mark was submitted within the category toy action figures, toy vehicles and toy robots convertible into other visual toy forms and currently has as status of Abandoned because the applicant failed to respond or filed a late response to an Office action. To view all documents in this file, click on the Trademark Document Retrieval link at the top of this page..